A Brief History of St. Paul’s

This is one of several wonderful stained glass windows at St. Paul’s

The first record of an Anglican service in Lindsay was dated November 27, 1836 and stated that “Rev. T. C. Wade preached at Mr. Rae’s on Concession 2. Appointment was to have been at Purdy’s Mills, about 13 miles further on. Roads too bad.” The first regular services were held in the Town Hall in 1855, conducted by the Rev. John Hickey from Fenelon Falls.

In 1846, the Crown granted an acre of land on the south side of Kent St. (west of William St.) to the Synod of the Diocese of Toronto. In 1858 the Rev. John Vickers, B. A., was appointed Rector and in 1859 a large frame church was built on the Kent Street land. Over the next few years the Rectors were Dr. W. T. Smithett in 1875 and the Rev. Vincent Clementi of Peterborough in 1881. Rev. Clementi was succeeded by his Curate, the Rev. Samuel Weston- Jones who became Rector in 1883.

Two years later, in 1885, Mr. Adam Hudspeth, Q. C., Church Warden, donated a parcel of land to the church and the Rev. Weston-Jones led the parish in the building of the present church on Russell St. The total initial cost was $19,032.70. The current structure is representative of the Gothic style of pointed architecture. The bell tower, which rises with the spire to 130 feet, is strongly buttressed in a plain early English style. The spire is topped by an intricate finial of hammered iron. The exterior side walls of the building are supported by buttresses. The church was designated as an Historical Site in 1990.

In 1887 the Rev. Charles Henry Marsh was appointed Rector and he remained for 48 years. During his ministry the parish grew in size and strength. A Sunday School was built in 1887 and was enlarged in 1926 (the present church hall). This new hall was named the Marsh Memorial Hall. The mortgage on the building was burned in 1939.

In 1958 the present pipe organ was installed. This organ was refurbished and upgraded in 2001 and is regarded to be one of the finest in the area. Renovations to the church, including new pews and lighting, were done in 1970. 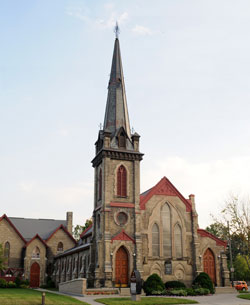 In 1973 the Rev. Ernest Lowin was appointed Rector followed by the Rev. Robert Hartley in 1979 and the Rev. Richard Miller in 1991. In 1995 Rodney H. Barlow became Priest-in-Charge and in 1997 he was appointed Incumbent of St. Paul’s. After Rod’s retirement, a Parish Selection Committee was struck and, after over a year of searching, the Rev. Warren Leibovitch was appointed as our Incumbent in September, 2008.

During the last few years there have been many improvements made to the fabric of the church. In 1997 the bell tower underwent extensive renovations and the wheelchair access was added at this time. The following year, 1998, the inside of the church was redecorated and new carpet installed. At this time the sanctuary and chancel were reconfigured. The altar was brought forward to the front of the chancel and the choir pews moved to the back. In 2000 a new kitchen was built and washrooms to accommodate the disabled were installed. In 2006 the Marsh Memorial Hall was renovated upstairs and down and a new metal roof was installed.

We are thankful for the many committed Christians who have come before us. Their dedication has given us a heritage of which to be proud. We at St Paul’s feel that we are the caretakers of this heritage and it is our hope to pass it on to future generations.

Sorry, we seem to have sold out of everything we had!