In 1836, the Rev. Charles Wade tramped along near-impassable roads to preach at a farmhouse 13 miles shy of Purdy’s Mills, now Lindsay. His journal read: “Roads to Purdy’s Mills too bad”. 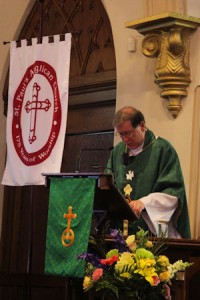 A major snowstorm that rolled through Central Ontario on Saturday, January 15th, however, didn’t prevent Archbishop Fred Hiltz and his wife Lynne from reaching Lindsay. There, the Archbishop joined The Reverend Warren Leibovitch and St. Paul’s parishioners for a traditional Eucharist Sunday morning that began a year of special events celebrating 175 years of Anglican worship in the area.

It was a bright, sparkling, cold Sunday morning. The snow had stopped and the roads had been ploughed. Anglicans began arriving from all parts of the parish. The church pews were full.

The service began with an organ prelude and the beautiful pealing of bells by St. Paul’s bell ringers. As the bells fell silent, an emotionally-moving processional, including a new banner designed for St. Paul’s 175th year, progressed to the sanctuary while all in attendance sang the much-loved hymn, “Holy, Holy, Holy”.

The overarching concept of the service was spiritual rebirth and renewal through baptism. Archbishop Hiltz first sat on the altar step, gathered the young people together around him, spoke to them in simple terms about baptism and encouraged them to ask their parents to help them discover where and when they were baptised. Continuing the theme in his sermon, he spoke about St. Paul’s conversion to Christianity, his baptism and continuing influence on today’s Christian faith. He then challenged the congregation to seek out their own date of baptism and celebrate that day as a fresh beginning to their Christian life. With plain, powerful words, he conveyed his strong belief that the Rite of Baptism directly affects our spiritual growth and deeply influences who and what we become in life.

The Primate’s presence, the service’s theme, the chosen hymns, each seemed to accentuate the sense that St. Paul’s was entering its own spiritual renewal.

After paying tribute to St. Paul’s and blessing the new Anniversary banner, the Archbishop presented St. Paul’s with a Certificate recognizing the 175th Anniversary Year.

Following the stirring service, the congregation enjoyed a wonderful reception in the church hall. There, one parishioner coincidentally became a symbol of St. Paul’s 175 years of continuity. Margaret Walker, nee Mackey, member of a long-term St. Paul’s family, happened to be celebrating her 90th birthday. She was recognized, there was a round of “happy birthday”, after which the 175th Anniversary cake was enjoyed.

There was one other unexpected benefit to St. Paul’s parishioners. In the words of one: “We came to know Archbishop Hiltz and his wife Lynne. We gained a deep appreciation of their down-to-earth manner, sense of humour and commitment”. That added greatly to the warmth and joy of this special St. Paul’s occasion.