“We see the town and neighbourhood (of Lindsay) below and around us, although tall pine trees, girdled and blackened, shut in the vision at a short distance”. Wonderful words, but oh, for a photograph of that view!

In late 1861, the editor of the Canadian Post climbed to the roof of George Kempt’s newly finished building at the foot of Kent Street just months after the newspaper had moved to Lindsay from Beaverton. Standing there, he would not have imagined that citizens of Lindsay in 2011 would see their town through his eyes or that the congregation of “Old St. Paul’s”, the white frame Anglican Church he spied up the south side of Kent Street, would be celebrating 175th years of Anglican worship in the Lindsay area.

Instead, looking over the town, he wrote:

“In 1850, the village of Lindsay contained about 300 inhabitants, a grist mill, saw mill, carding and fulling mill, a foundry, ashery, tannery and Roman Catholic Church. Look at it now. When we now write, the town will be upwards of 2100, showing an increase of 700 percent! We have now a railway in town connecting our inland country to the sea-board and four steamers ply daily during the summer to and from the various ports in our northern townships, giving our farmers a fair market for their produce and our merchants every advantage from rapid transportation. There are now six steam engines and two foundries. We have daily mail east, west and south.” Attempting to count the visible buildings from his rooftop perch, after speaking of the blackened pine trees, he went on to say, “I see 100 buildings of all sizes, 20 first class brick buildings, but it is impossible to notice all the frame buildings erected or in the process of being erected. (And) instead of one church, there are now four: Episcopal, Presbyterian, Methodist and Roman Catholic”. 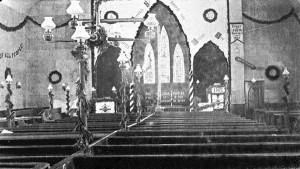 The first image: the pine trees girdled and blackened. Four months before on July 5th just after the election won by James Dunsford over John Cameron, the great Lindsay fire started in a small frame house on Ridout Street. By dark, it had destroyed about 90 homes, mills, hotels, other businesses and a railway station in the Kent, William, Peel and Lindsay Street areas. Few had insurance. Yet four months later, brick buildings were replacing frame ones and merchants were advertising new locations or cheap prices for damaged goods because of “the late terrible calamity”.

The second image: the growth of churches. Citizens were usually church-goers in those days and churches were integrally connected to family and community life in good times and bad. One of them was St. Paul’s.

In November, 1836, Rev. Wade, a travelling Anglican minister, struggled through swamps and poor roads to preach a service at Mr. Rae’s farm just east of Purdy’s Mills, now Lindsay. In his notes, he said, “Appointment at Purdy’s Mills (but) roads too bad”. It was the start. Travelling Episcopal ministers continued preaching in close-by Anglican farm homes through the 1830’s and ‘40’s.

In 1846, the Crown deeded three-quarters of the south side of the middle block of Kent Street to the Anglican Church at a value of $175. The opportunity for an Anglican church inside Lindsay was now in reach.

Nearly a decade passed. In the early evening of July 23, 1855, a small group of men came to the “Old Town Hall” at Kent and Cambridge streets where Anglican Church services and Vestry meetings had been conducted for several years.

The agenda this evening, though, was particularly significant.

John Thirkell was there. A local carriage manufacturer, born in New York State about 1805, he was one of the oldest and likely the most influential. He likely picked up George Molyneux Roche two doors down and Thomas Charles Patrick, his future son-in-law who also lived nearby. George was born in Portsmouth, England and immigrated to Canada in 1830 with his family. At 32, he was young to have become the local Crown Land Agent. He would serve St. Paul’s for 15 more years and then pass away suddenly in 1870 at age 48. Thomas was the local druggist, shortly to wed John’s daughter, Marion. Within five years, he would also die suddenly. These three probably talked on the way over because they quickly nominated Dr. Joshua Fidler as chairperson. Born in Sussex, England, only 32 years old, just married to Laura Jellet of Northumberland County, Joshua was the local doctor and surgeon and would be a major part of St. Paul’s life until his own death in 1887. The last known man at the meeting was J.H. Coulter, who became secretary of the meeting.

There were likely others there, but the minutes of the meeting did not list all present. John Bryans, who immigrated from Fermanagh, Ireland, likely rode to Lindsay from his outlying farm. He would influence St. Paul’s life for another half-century and stimulate debates when he died in 1906 as to whether he was over 100 years old. His son, Robert Bryans, would later join him as a church leader and Warden. William Bell, also born in Ireland in 1806, a local carpenter and, later, a railroad conductor, might also have been present.

After taking the chair, Dr. Fidler quickly accepted a motion: “Moved by J.H. Coulter, seconded by Mr. Thirkell .. to apply to the Bishop for the appointment of a clergyman for the Township of Ops, and that he be guaranteed the sum of One Hundred and Twenty-five pounds per annum.” The motion carried, but was quickly followed with an amendment raising it to two hundred pounds and a guaranteed residence.

The Rev. John Hickey, Rector of Fenelon Falls, accepted the challenge and travelled each Sunday to preach in the Old Town Hall.

How well paid was he? Hard to tell. Meat averaged 10 cents per pound, coffee about 12 cents, sugar about 8 cents while a fine for a liquor offence set a man back $1 and court costs. Pounds and dollars, though, were having trouble with each other. The slow transition from one to the other caused the exchange rate to fluctuate wildly and fueled a sharp debate in town on whether local banks and the Post Office were making too much profit on the exchange.

What next? A minister preaching in town was good but was only a first step. The pressure to build a real Anglican church and choose a minister who would live and work in Lindsay grew stronger.

But what kind of community was Lindsay?

Old newspapers tell us we had a sense of humour, expressed strong opinions and were well aware of life elsewhere.

Internationally, we followed the American Civil War and were fascinated with gossip about upper class life in England. One story told how Lord Palmerston, Prime Minister of Great Britain, travelled to Walmer Castle near Dover on business and inadvertently slept in a castle bedroom directly above 100 barrels of improperly stored gunpowder.

Locally, we were shocked at the behaviour of a local Justice of the Peace. He had been fined $1 and costs for assaulting a citizen and sternly directed to “keep the peace”. Four days later, he assaulted the same citizen again.

We travelled easily and often by stage coach.

We shopped at Victoria Bakery and Grocery at William and Peel Street, lunched at Doheny’s Hotel at Kent and William Street, enjoyed a drink at the Glasgow House in “the late Post Office” and left our horse and buggy in the Harrington’s Hotel stable on Queen Street. Whatever else we did in town that day, we definitely dropped into Joseph Funk’s butcher shop. His ad read:

“Good meat I keep as all do know
Adjoining Joseph Funk’s.
The flies, I warrant, do not ‘blow’
Upon my tender junks.

Beef, mutton, lamb and veal also
In season you may find;
And if of soup you want ‘a go’
Speak for the tails in time.

Good marrow-bones, kidneys likewise
Sweet-breads and tit-bits all,
Livers and tongues; if you are wise
You’ll soon give me a call”.