Born, in Montreal, son of Albert and Shirley, Rev. Warren Leibovitch came to us in September 2008. “The principles (partially quoted above) found in Matthew 25: 31-40 are an important part of my ministry”, he said. His early ministry, in fact, included chaplaincy in hospitals, palliative care, children in distress and psychiatric patients. And in the months before he came to St. Paul’s, he was building homes and teaching indigenous people in Guatemala. 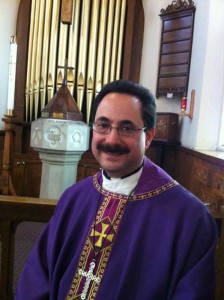 Shortly after arriving here, Rev. Warren said he found us to be a warm, welcoming community. Asked about his ministerial style, he said he was respectful of tradition but would mix new elements in as well. “Many people are looking for faith”, he said. “They want to believe but have either been unhappy with past experiences in church or have no experience at all”.

In the year he came, Lindsay had long-since reached the modern age. The Airport Task Force’s first meeting on a possible closure brought 100 people to City Hall. A second puzzling bout of dead carp emerged: in the Peterborough area this time. Tommy Hunter was due at the Academy Theatre and Cody Hodgson had earned a spot on Team Canada. And at the December 6th vigil for the 14 female engineering students murdered at Ecole Polytechnique in Montreal, local Crown Attorney Lisa Cameron began by saying, “This is a day to ask why”.

What was Rev. Leibovitch’s route to the priesthood? He had a limited belief system in his early years but found a need to learn more about God in his later teens. He took special undergraduate credits from a military college, gained a marketing diploma and then graduated with a B.A. in English. With that background, he attended the University of Toronto and Wycliffe College to become Priest, Trinity College for his Master of Theology and is currently working toward his Doctorate degree.

So what kind of priest did he become? Before St. Paul’s, Rev. Warren took over a store-front church with a few committed families, later moved them into a portable church on acquired land and still later into a newly built permanent church. And along that hectic learning curve of site plans and building code approvals, he still deepened his parishioners’ spiritual lives, trained parishioners in pastoral care and outreach and helped expand a church from a few families to a congregation with a solid foundation for the future.

Spiritually, he speaks to us “below the pulpit” with the energy of a young and committed pastor. Using his own cultural background, he helps us reach more deeply into the fabric of biblical life to better understand the issues Jesus faced every day of his own ministry.

He is a teacher. He believes in Christian Education for all ages, offers study programs on the basics of our Christian faith and others that help us live our faith in a post-modern world. Like all good religious teachers, he believes in the inner meaning of “congregation”: to enhance our faith and love as we work and pray together and then use these strengths to help others in need.

When you observe him listening to the choir, you know he loves music; all kinds of music: traditional church liturgies, contemporary church hymns and the beautiful organ music of North American and English cathedrals. And he also plays a mean guitar.

And asked when he arrived about the depth of his faith, his instinctive response was: “I’m living the faith, not just singing a song or two.”

He has been with us now for three years. We talked with him recently about the future. “What do you now hope for us?” we asked. “We have many parishioners who are ill or are grieving”, he said.

“I want to see more Healing Sundays”. We asked about young people. “We need to bring in our youth; to grow as a church”, he replied. “I would like to see our teenagers take part in a once a month Youth Sunday. They are a part of our younger families living hectic lives in a modern world. We must provide those families with the way to come into our church and feel comfortable and wanted”.

Then we asked, “What about our yearly cycle of church events?” After talking enthusiastically about the activities and the experienced volunteers that run them, he spoke of a mentoring need as we moved into the future.

“We should always be training someone to take our place”, he said. “Ultimately, the torch must be passed”.

We asked about the process of renewal. “It began in 2009”, he said. “We’ve reflected on our strengths and weaknesses. More recently we ran workshops to develop a fresh mission, establish our overall vision and state the core values we believe in”. “As simply as you can state it”, we asked: “what is our overarching mission that came out of that process?” “It is already simple”, he said. “Our mission is to know Jesus and make him known to others”. “And what is the vision? How do we make it happen?” we asked. He spoke of it as incorporating six parts. On Outreach: a church actively supporting those ministries in Canada and around the world that struggle to help poor and marginalized people. On small group action: a church where many dynamic small groups generate ideas, deepen faith and complete activities within that comforting atmosphere of safety and acceptance often found within a smaller group. On youth and families: a church where an age-appropriate ministry helps both young and old grow and become followers of Jesus. On our worship practices: a church where people of different backgrounds joyfully gather together to praise and honour Christ. On our facilities: a church with enough space to welcome many different users and enough flexibility to accommodate future growth. And on stewardship: a church where each of us contributes as fully as we can.

Then our last question: “How do we help ensure our success?” we asked.

“Our renewal approach”, he said, “must be so simple, clear and inspiring that each of us can easily articulate our mission, our vision and our core values and actively play our part”.

“This is a story of a church: its roots, odyssey of faith, good works and future. In each generation of our 175 years, clergy and congregation have prayed, grieved, celebrated and worked together as they struggled to interpret God’s design for them.”

These were among the first words we wrote about St. Paul’s nearly a year ago. They reflect what the church has been trying to do this year: interpret and celebrate our past; examine our present; plan our future.

And that future is upon us. St. Paul’s is turning the page and starting a new chapter. And it’s now time to put this series of articles to rest.

There are many people who helped. For their advice and encouragement, we specially thank the now-exhausted St. Paul’s 175th Anniversary Committee. For his willingness to trust the process and publish the outcome, we are grateful to the Lindsay Post Editor. For their help on the almost-impossible task of absorbing the essence of a town over 175 years, we are indebted to the Lindsay Library’s Reference Department personnel. For the quality of insight of those “old timers” inside St. Paul’s and around the town of Lindsay that we interviewed: our private appreciation.

A final thought. We spent an intense year researching 175 years in the life of St. Paul’s and the town of Lindsay. But no research is ever that focused. In the process, we were lucky enough to look sideways and observe the faith, dreams and good works of many special people. We found them in our town, in all our churches, in the past and in the present. We would like to pay homage to them.