“One night our minister, out of the blue, asked me, ‘Ernie, what do you want for your life?’ and without thinking, I said, ‘I want to be a minister’. I surprised myself, and I can still see my wife’s face. We had never talked of it because I didn’t even know it was in my heart. I tried to push it aside. I was in insurance. I made lots of money. I thought: ‘Why not stay as we are?’ But it wouldn’t let me be.” 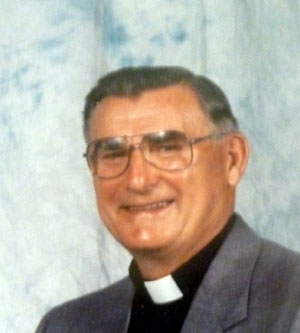 Rev. Ernest Lowin was speaking in the 1970’s during a CBC “Man Alive” program on St. Paul’s. Born in Montreal in 1928, he worked for an insurance company in Toronto at the time of this event. After some soul-searching, he accepted the call and was ordained Priest. Serving first in two Toronto-area churches, he arrived in 1973.

He came to a modern Lindsay. The Ross expanded and the SSFC campus began. We bought “no-iron” sheets for $3.99 and received a 6% “early payment” discount on property tax. In Ottawa we began a national debate on the death penalty.

Rev. Lowin spoke of our good work but also of the loss of some Church school teachers and of our curate, Rev. Kirk. We began volunteering more because we couldn’t afford to replace him. We carried on his folk mass, built hospital visitation programs, became Church school teachers, started a ministry to the elderly and began the “Designated Givings” concept. He also used the parable of the lost coin to tell us our worship practices needed attention: “Many people only attend at Christmas and Easter. They may still be in the Lord’s house, but they are out of the Lord’s hand”. In response, we joined scripture study groups and worked to persuade others to attend more often.

We set up our “Talent Fund” (seed funds for interesting fund-raising ideas) that produced St. Paul’s Fair Booth, the Pancake and Strawberry Suppers and many others. Our donations rose and a new Stewardship program succeeded. Then a unique opportunity came up. In 1885, we had moved from “Old St. Paul’s” on Kent St., to “New St. Paul’s. The land under the old church and adjacent stores, however, still belonged to the Anglican Church. In the 1970’s, we sold this land and then purchased, renovated and rented out homes behind “New St. Paul’s”.

Lindsay changed. Canadian Tire moved to upper Kent St. and the Cambridge St. Mall opened on the old site of Fee’s Garage. We bought loin of pork for $1.17 per pound and purchased that one year-old Ford Supercab for $7395. Terry Fox was forced to halt his Cross-Canada run for cancer and our pupils sent him “get well” cards. Nationally, John Diefenbaker’s funeral train carried him home to Prince Albert and Pierre Trudeau out-fought Rene Levesque to help defeat the 1980 Quebec Referendum.

St. Paul’s was joined next by a man with a constant smile and boundless faith and optimism. Rev. Robert Hartley was a graduate in Psychology/Social Sciences, Theology and Pastoral Counselling. After parish work in Toronto and Orillia, he joined us in 1979. Asked what his mission at St. Paul’s would be, he said,

“I would like the congregation to become a more effective Christian community. In a society which is supposed to be Christian, but in reality, few are, we must sort out to what God is calling us”. The newspaper called him “the Rector with ideas and ideals”. He mailed church service brochures to shut-in parishioners to make our Sunday radio broadcasts more meaningful. He joined community and church leaders to turn the church rectory into a home for physically disabled adults, thereby facilitating attendance at our Christmas and Easter wheelchair services. He brought a number of parishioners to deeper levels of faith, doubled our worshiping congregation and budget and increased our ministry staff to four.

He was also a history buff. During our 150th anniversary, he wrote an excellent history of the church, a beautiful description of the interior of “Old St. Paul’s” and a distinctive portrait of Canon Marsh, our longest-serving Rector.

The night before his last service on Remembrance Day, 1990, we had a parish party for him. There, a final, special comment was made:

“He was a teacher who encouraged us on our Christian journey”.

It was a time of proud achievements, curious issues and failures. Nancy Sweetnam set a new 200 Individual Medley record at the Commonwealth Games in New Zealand. Town Council debated how many curb-side garbage bags we were allowed and some citizens sought creative solutions for bags 5 and 6: “Quick, Charlie, go see how many bags the Brown’s put out!” We bought bath towels for $1.47, learned average housing prices had tripled in a decade to $139,000 and watched the location for a covered pool shift from the Armoury, to LCVI and finally to SSFC. Beyond Lindsay, we celebrated Nelson Mandela’s release from prison after 27 years and observed the Meech Lake Accord go down to defeat. He was pleased with the quality of our lay ministry. He also clarified the need for our liturgy to reflect our personal spiritual needs while remaining theologically based. And he urged us to work together as a caring community to discover common spiritual goals. In response, we joined with St. George’s, Cameron in a parish affiliation, increased our church attendance and introduced a new church school curriculum. We accelerated our ministry to shut-in parishioners, introduced our “Harvest Happenings” fall weekend and completed our property purchases behind the church. We felt proud when our own Jean Lummiss was ordained Deacon. We revived our newsletter, the “Grapevine”, began the G.E.M.S. luncheons and revitalized a “coffee and fellowship” gathering after service.

Beyond St. Paul’s, we supported the work of the Salvation Army and Victoria County Women’s Resources. Rev Miller took on leadership roles with the Lindsay and District Ministerial Association, with the Ross as on-call Chaplain and facilitator in their Pastoral Care and staff stress programs and with the Stinson Memorial Lecture Series board to bring renowned speakers before high school students on ethical topics.

In 1995, we said goodbye when he was called to Oshawa.

In Lindsay, we crept closer to the present. Council debated a proposed smoking by-law as some commercial outlets announced they were going smoke-free. A localized tornado “literally pushed trees out of the ground” and crashed planes together at the Lindsay airport. Wilson Fields and the new Police Services headquarters officially opened. We followed the second Quebec Referendum of 1995 to a scary “Canada” win by less than 1% of the vote. And, with all our seeming problems, we read that the “United Nations bestowed the title of #1 on Canada for the 4th time in the past six years”. Rev. Rod Barlow was born in Calgary and became Priest in 1968. After service in Ontario and British Columbia, he joined us in 1995. We had sought a church leader with vision, compassion and decision-making skills and soon discovered we had found him.

Our most pressing need was financial focus. Under his focus, our capital plan raised the needed money and our strategic infrastructure plan tackled needed repairs and renovations. We built our new kitchen, purchased the Post Office building and then rented it back to the Post Office and agencies to stabilize income and parking.

And as he guided us, an indirect benefit emerged: he brought parishioners together to share in common goals. Special ideas flourished. The Bell Ringers, Christmas Dinner for those alone or in need and the Mystery Dinner Theatre emerged. The modern Outreach programs, special support for King Albert School and additional wheelchair services and access began. And those of us who worked closely with him soon realized we felt good about our own role in the process. He applauded our achievements and occasionally nudged us in better directions.

As a preacher, he made sermons resonate by relating them to our modern world. He used succinct language and deft humour to make his messages more vivid.

In 2007, Rod retired. We thanked him for the special years. Just prior to leaving, he reached out to us:

“Some people have thanked me for my ministry. The fact is that I and my family have received much ministry in return. The church has lifted us up and supported us, without which our work would not have been possible. So I thank you for giving me the opportunity to offer my ministry, knowing that it could not have happened without your own ministry to me and my family”.