“(Our) guest speaker has recently returned from the war front”. 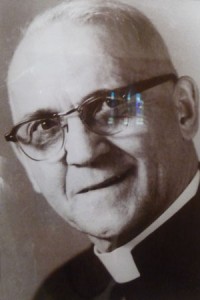 Five years later, he became our new Rector. Rev. Harold Hesketh was born in Liverpool, England in 1891. As the eldest child, he had to leave school at 13 to support his family after his father died. Influenced by a local priest to enter the ministry, he continued his education at night and then immigrated to Canada in 1911 to attend Wycliffe College. While there, he met a girl, but his timing was terrible. He loved hockey and played it hard. In one game he was hit and had 16 stitches, mostly to his face. While recuperating, Gertrude Ann Hollingworth came along. She obviously saw the qualities of the man beyond his temporarily rearranged face because they were married shortly after he became a priest. During their marriage, they had four children, two of which still live in the Lindsay area: Marjery (Woodside) and Mary (Parliament).

As a priest, he made certain his career was unique. He chose postings to back-country Athabasca, urban Toronto, New Brunswick’s Miramachi area, Northern Ontario’s Chapleau area, Quebec City and then joined the army as a captain and chaplain. Returning after the war, he accepted a call to rural Ontario at Cannington, before St. Paul’s reached out.

The post-war Lindsay he came to had changed. We bought our writing supplies from Golden’s Stationers, our prescriptions from Shaw’s Drug Store and visited Canadian Tire at its new Peel and William St. location. While all this sounds like a standard quiet town, downtown life still had its moments. One headline read: “Chief Lawler (was) Badly Beaten Up (by a) 260 pound Professional Wrestler (who) is Charged With Obstructing Police (in a) Domestic Dispute.”

In his parish work, Rev. Hesketh took off running and, at his first year-end church celebration, finally paused to speak to us all. He spoke of the people who came before him: “you have had faithful leaders (and) they have had faithful people supporting them”. He thanked the parish for their support to him and their kindness to his family. It was an exceptionally good start.

But five months later, Gertrude died suddenly at the Rectory. Heartbroken, he carried on. Some years later, he married again, to Edith Lenore Hayes.

More than a decade passed. For better or for worse, Lindsay entered the modern age. Our schools upgraded with fire alarms and fire doors. Clayton Hodgson, our M.P., felt that a little betting (“just $1.00 to $2.00”) at the Lindsay Fair wouldn’t hurt. We shopped downtown at Percy Howzer Men’s Wear and at Tangley Furniture. We learned the Little Britain Telephone Company was about to sell to Ma Bell. We saw plans for a future 30-store shopping center.

And south of the border, John F. Kennedy was elected as the first Roman Catholic President of the United States.

“New St. Paul’s” had its 75th anniversary in 1960. Rev Hesketh spoke of a new level of commitment in the church. He also told us that the parish had decided to officially date the start of “Anglican worship in the area” to Rev. Wade’s arrival in 1836.

His career was drawing to a close but he had one final matter to complete for us. On Wednesday, January 25, 1961, he welcomed a number of church dignitaries to St. Paul’s. What was the occasion? “New St. Paul’s”, built in 1885, had its kitchen and Sunday school rooms in the basement. In 1887, a church school house was built on the lot. In 1926, when the school house was enlarged and rebuilt into the Parish Hall and given the name “Marsh Memorial Hall”, we gained a new kitchen, choir room, Assembly Hall and Sunday School facilities. Now, 35 years later, it had undergone major repairs and renovations. And so, on this day of “ancient ceremonies, stirring hymns and the atmosphere of a great occasion”, it was officially re-opened.

At the end of 1961, Rev. Hesketh retired and moved to Peterborough where he became Honorary Assistant at St. John’s. We gathered to say goodbye. It was important that he knew how deeply admired and loved he was. 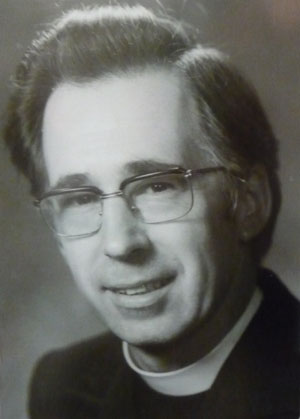 His successor was Rev. David Lemon. A “second-generation priest”, he was born in the Mono West Anglican Church Rectory in 1925. Wishing to be a priest, he attended Wycliffe College and was ordained in 1951. Called first to Stayner and then to Cooksville, he then came to St. Paul’s.

Appointed three months before assuming the role, he and his wife, Rita (Turpin) used the time to come and meet parishioners. Rita joined Edith Hesketh and Mrs. Gordon Mackey in hosting a tea and bazaar at St. Paul’s while Rev Lemon drove around Lindsay absorbing the atmosphere of this town he had chosen to live in.

The 60’s had arrived: an era of social concern; a time of marches and protests. All churches stepped forward on issues of social justice. Canada’s Anglican Church Congress met early in the decade to take a strong stand on injustice. In preparing for it, Rev. Lemon talked privately with us in our homes, gathered ideas and used them in a series of “Growing in Faith” workshops. After the Congress met, he described its conclusions: Beyond faith and beyond prayer, he said, “God has called us to be a serving church .. a listening church ..(in which) segregation and other forms of discrimination are a sin.” And from that Congress, new “Stewardship of Life” workshops began in 1964. In outlining St. Paul’s part in this future, Rev. Lemon said, “We are setting out on a new course of faith and parish life renewal.” What he wanted was a personal commitment from each of us to step forward as we moved into this new age of change.

How was Lindsay changing? On the surface, we saw new additions to Central Senior and Queen Victoria schools, the new Victoria County Museum at the top of Kent nearing completion, the final train run to Bobcaygeon and the end of Lindsay to Toronto passenger service. We bet legally on horse races at the Lindsay Fair, danced the Twist at the high school prom and worried that 35 cent cafeteria lunches were too pricy. But on a deeper level, the papers also reflected our growing concern about unfairness; our strong desire to help those in need, locally and around the world.

And special reasons for celebrating kept coming. Three years later, St. Paul’s (the church itself this time) underwent a major renovation, with new plaster, paint, lighting, pews, kneelers and floors, and a re-location of the Baptismal Font and we gathered to celebrate again. There was also a new stained glass window in memory of Ethel Florence (Way) Blewett.

And the town of Lindsay around us evolved. That year, we rented an apartment at the old Lindsay Mills for $110 a month, a box of Kleenex for 17 cents and bought fruit from Joe Lamantia & Sons. We watched Mayor Eakins at the Lindsay-Nayoro Twinning Japanese festival, Watson Kirkconnell as he became a “Knight of Mark Twain” and attended the ground-breaking ceremony for the Ross Memorial Hospital expansion.

We also came to St. Paul’s Marsh Memorial Hall to welcome the arrival of our new Tibetan neighbours. As the Chinese invaded Tibet, some had shouldered weapons to guard the Dalai Llama as he escaped across the mountains into India.

L.C.I. had become LCVI and its student population had grown so large that it had become two schools within one building. The answer had to be a new high school. Doug Nicholls, a well-known Lindsay teacher, joined school trustees Paul McGuire and Jack Callaghan to plan and build I.E. Weldon S.S. just east of Highway 36.

In St. Paul’s, creative fund-raising strategies helped balance budgets. Among many, they included our Pancake Supper on Shrove Tuesday, our Strawberry Supper each June and our Food Booth each September at the Lindsay Fair.

In March of 1971, another major memorial service and dedication occurred. Three stained glass windows, called “the Atonement” were unveiled by Mrs. Laura Beall in memory of the Beall family, and the bell tower Carillon was donated by Mrs. Annie Matthews in memory of the Matthews-Harris family.

A year later, St. Paul’s hosted a “Festivals of Faith” program on a cold October day. It was attended by people from across the Diocese. They arrived frozen but quickly warmed up to the hymn singing, the Young Peoples’ group and to Jim Collins singing “All Good Gifts” from the musical Godspell. Bishop Garnsworthy then stood up, made his own personal statement of faith and issued a challenge to all of us:

We have lived through a crisis of faith”, he said. “(To) the claim that man has come of age and does not need God, go to Munich (the killing of Israeli Olympic athletes).. or to Belfast. To the claim that there ..is nothing we can tell the world, when was the last time you ever told anybody about your faith? The church will die unless we have Christians (with) the kind of faith they can’t help but share.”

Rev Lemon’s had been with us 12 years. He reminisced at one point on how much we had helped him and how Lindsay had shaped his children. In 1972, he was appointed a Canon of St. James Cathedral. And as we gathered to congratulate him, he had to tell us that the bishop had just appointed him to a church in Toronto and that he would be leaving us.