“When will this terrible war end!”

While we know now when it ended, it seemed unending in early 1918. Shortages were everywhere. Food was one of them. So many young farmers had gone overseas that food production had dropped. Out of this need came the S.O.S. effort. “Canada wants 25,000 boy farmers – Soldiers of the Soil. She wants them soon and urgently.” These were boys too young to fight, who volunteered to work the empty farms. About 80 students from Lindsay Collegiate signed up and headed across the country to those farms needing help.

An Order-In-Council made idleness unpatriotic and illegal. “All male persons 16 to 60 must be regularly engaged except students proceeding with training”. A conviction could result in a “$100 fine or 6 months in jail at hard labour”.

Fear of death in war brought out strange superstitions. “Never before have the soldiers amassed so large a number of superstitions. (Those) having to do with the number 3 are the most widespread. The third of anything was thought to be fatal”.

While the years of the Great War passed and we focused on it every day, an unusual event in town could briefly take away our attention:

“A bad wreck (occurred) on the Haliburton line on Victoria Avenue between Peel and Wellington Streets around midnight, Wednesday (February 26) when six GTR box cars left the track and were piled up in a heap across the avenue. The train had just passed Maunder’s mill when the wreck occurred. One car crashed into (a) residence on the east side,”

By mid-1918, a disease, lurking below the surface, began receiving serious attention. “Spanish influenza rages in Canada!” Before it finished, 500 million people caught it and 50-100 million died. Every-day life changed. In many towns, including Lindsay, stores closed and commerce ground down.

The Germans began to retreat. Finally, it was over. “VICTORY!” The local headlines read. “Armistice signed November 11!”

But Lindsay citizens woke the next morning without knowing this. As the morning progressed, word spread. People gathered on Kent Street cheering and shaking hands. Merchants arrived but quickly joined the crowds. Church bells started ringing. People gathered flags. Lindsay’s mayor quickly declared a public holiday. Before long, a parade was organized. Everyone in town took part, either marching or cheering from the sidelines. 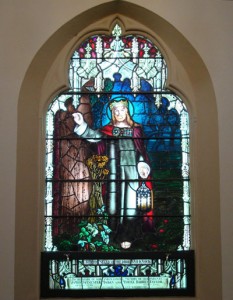 It was time for the future. Returning soldiers received three months wages to help them fit into civilian life. Joblessness rose while the cost of living rose even higher. Labour protests happened in Lindsay and other towns and cities. The Russian Revolution had brought a fear of Bolshevism and any protest fed that fear. It all came together in the Winnipeg General Strike of 1919.

In 1919 as well, Rev. Marsh sadly wrote of the passing of three St. Paul’s old-timers in October. “On three successive Sundays,” he said, “we had well-tried friends of St. Paul’s Church called away by death”. They included John Sootheran who had helped build “New St. Paul’s”, Richard Sylvester, who had made major financial donations to St. Paul’s over the years and Samuel Henderson, who had supported St. Paul’s for thirty years.

Prosperity began to return. In the latter years of the 1920’s, the heated market rose higher. On October 29th, 1929 it crashed. The economic chaos that followed was soon called ‘The Great Depression”.

The implications of the stock market crash were not immediately obvious. On that same black day, the newspaper read: “Honor Paid to Mrs. Marsh. The Kawartha Chapter of the Daughters of the Empire gathered at the home of Mrs. R.M. Beall for an event: the presentation of a life membership to Mrs. (Canon) Marsh”. Lady Clare Annesley, a prominent Belfast British Labour M.P., making the rounds in Canada, attended and spoke on the value of women to help prevent war: “women want to see acts of ‘heroism of human nature’ used not for destruction but to build up a world where the horrors of war are unknown”.

What kept the Crash from our attention for so long?

Sports: “A very strong LCI’s Girls’ Basketball team may beat Peterborough.” And politics: “Howard Ferguson, Conservative, sweeps the province … Liberals cut in half.” And ghosts and goblins: “The ancient Druids who kept fire going on Hallowe’en had nothing on most of the citizens of Lindsay last night. Damage was small compared with other years”. A local environmental disaster; “Approximately 6700 gallons of gasoline were (accidentally) poured into the sewers of Lindsay .. the affected area seems to be between Kent St. and Francis St. and from Victoria Ave to the river”. Then Armistice Day, “The Rev. Canon Marsh gave the Memorial Prayer”. Finally, an unusual local burglary: “Seven Houses Entered By Burglar” on Colborne West and Elgin Streets. Goods, cash and a bicycle were stolen. The thief then pedaled out of town to a farmhouse where he traded the bicycle for a stolen car.

In the early 1930’s, we grew uneasy at events in Germany. The terms of the Treaty of Versailles, post-war inflation and the harsh impact of the Great Depression on Germany had helped fuel the rise of the National Socialist (or “Nazi”) Party led by a former WW1 Austrian corporal, Adolph Hitler. By the summer of 1932, his leaders were household names: “the strong men of the motley Hitler horde ..(are).. (the Berliner) Captain Goering, (the Prussian) Dr. Julius Goebbels and (the Bavarian) Gregor Strasser”. Germany demanded “equality of arms” with other European powers, notified France of her intention to “reorganize the army” (a euphemism for rearmament) and by early September, Herman Goering had gained the presidency of the new German Reichstag.

In 1935, the Lindsay Daily Post wrote historical articles on all Lindsay churches. St. Paul’s story spoke of the curates or assistant ministers of St. Paul’s. For 60 years, Anglican ministers in the Lindsay area had worked alone. Beginning in 1893, thirteen curates in sequence were placed with Rev. Marsh. They baptized, married and buried us, were married and had children among us themselves and became a part of St. Paul’s if only for a few years each. For all these reasons, we must recognize them.

In 1909 in his 28th year as a minister, Rev. Marsh was made Canon of the Cathedral by the Archbishop and, in 1933, Wycliffe College honoured him with the degree of Doctor of Divinity.

And in 1935, he retired. In his own mind, his life here passed swiftly. He resisted his superiors’ pressure to move several times until the great “fit” between himself, the community of Lindsay and the parishioners of St. Paul’s became obvious to them.

He was a great walker and wandered the whole of Lindsay, talking with everyone he knew and finding ways to help them. He did the same thing after retirement through the streets around St. Timothy’s, his son’s Toronto church, and inside its Sunday school. When he did this, the big city parishioners were puzzled but intrigued. The children, though, understood him. One of the youngest, observing his simple, friendly manner with them, later said to his son: “Your father is like Jesus”.

On those Lindsay walks, he found the poor and friendless on the streets, opened the door of the rectory to them and, when they died, with simple compassion, “he performed the last offices of their burial”.

Rev. Robert Hartley, St. Paul’s incumbent from 1979 to 1990, wrote a history of St. Paul’s on its 150th Anniversary in 1986. He interviewed Bishop Henry Marsh about his father and received this reply

“.. he wanted everyone to have full access to God, whether inside or outside the church. He worked and fought for this constantly. He threatened to leave over it, you know. He arranged for a motion to go before the annual vestry meeting to eliminate charging a fee for the pews (at an early time parishioners were charged for ‘their’ pews”). When it didn’t pass, he moved it again and said they had to choose between the rents and the rector. Then he left the room. It was a great test over who was welcome, and he won”.

And reflecting on him as a father:

“Sometimes you saw his loving heart best when he prayed. It was hard for that generation to say things like ‘I love you’, but when he prayed for me, his love was very clear!”

And so he retired, although ministers don’t really retire. He lost Emily after 50 years of marriage, just three years before his own death. His last sermon, at 86 years of age, and only three months before he died, was back at his son’s parish of St. Timothy’s. In it, he described how he viewed his own imminent death.

“It can’t be very long before I pass from this life to the life beyond, but I have so many friends waiting for me on the other side that I am looking forward to meeting them once again.”