A site for the new Post Office became a town-wide debate in the mid 1880’s. “A strong effort has been made to secure the new building on an eastern site .. The old English church is considered by east-enders too far west”. “Old St. Paul’s”, no longer a church but still standing on Kent Street, was one of the serious Post Office options. East-enders felt they paid high taxes without benefits and the “greedy west-enders” had gained all the municipal services and the railway.

Some debates were decorous:

“The public meeting last Friday evening .. was a highly interesting and spicy gathering. (It) adopted a resolution to .. submit the question to a popular vote … (and) closed with loyal cheers for the Queen”. Others discussions were less restrained. “Two citizens fell to discussing the post office site question at Hunting’s Shoe Shop. The earnest citizens grew so emphatic over the matter that they came to blows, upset the stove and fractured the work bench”.

While the debate raged, we continued to shop in a changed downtown. We now ordered a wrought iron railing from John Makins’ Iron Foundry, bought shoes from T.G. Marlatt, suits from J. Skitch, sugar and spice delicacies from Arch. Campbell, looked after our abscessed tooth in William H. Gross’ dental office and bought towels from the McCrimmon Brothers.

Even sport was changing. Cricket declined as baseball fever rose.

“A baseball match .. between members of the defunct cricket club and the Lindsay Baseball Club .. would be interesting. So would the return match where base-ballists would play at cricket instead of their (own) game.” 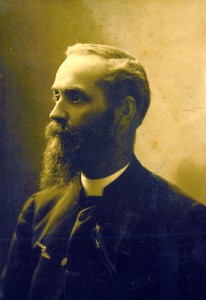 And then there was that strange weather in 1886. George Calvert, an old market gardener from Reaboro, said the crops that season were likely to be the best in his lifetime. Then two days later, “a huge thunderstorm passed through Lindsay.. rain fell in great violence, smashing the .. shrubs and growing vegetables. It is feared the crops have been badly (damaged).” And the storm brought injuries: “Mr. Wm. Byrnell of Fenelon met with a serious accident. .. (He) was drawing grain into the barn ..when he attempted to close the door. The wind, which was blowing almost a hurricane, slammed the door against him with such violence that (he) was thrown some distance (and) broke four ribs and his left arm.”

The national news spoke of the destructive repercussions of the temperance-inspired Scott Act. In the dark of night, acts of revenge in Lindsay and other towns against the Temperance “Establishment” spoke of heated feelings.

And in mid-‘87, an announcement said “the public will learn with much regret that Rev. (Samuel)Weston-Jones has resigned the incumbency of St. Paul’s with the view of going up to Charlottetown”.

And, a week later: “a contract for building new St. Paul’s Sunday school has been let to Mr. W. McBurney for $3385.” For many years, this addition was called “the School House”. Later, it would be called the “Marsh Memorial Hall”

Who was this Marsh person? The answer can be found in his son’s words:

“In 1887, the Parish of St. Paul’s Lindsay fell vacant and Rev. Charles Marsh (from Orillia) was invited to come and take the services that the Parish might look him over. He informed the Lindsay authorities that he was happily busy in his work in his own church. One Sunday three strange men appeared at St. James’ Church, Orillia and, after the service had a chat with the curate and (thereafter) recommended him to the congregation at Lindsay”.

They would not take “no” as an answer.

Born at Holland’s Landing in 1854, Charles Henry Marsh had roots back to Somerset and Wiltshire, England. Educated locally with higher education in London, Ontario, he was one of the first ministerial students at Toronto’s new Wycliffe College. After a student ministry in the parish of Otonabee, he was ordained in 1881, took over the Parish of Rosemount in Simcoe County and in 1886, became Curate at St. James, Orillia.

And so began his long and successful 48 year career at St. Paul’s, Lindsay.

Forty-five years later in 1932, a newspaper article described him as “Lindsay’s most loved man”. Interviewed for that article, he thought back to his arrival from Orillia and, tongue-in-cheek, began comparing the two communities:

“(In 1887) the population of Lindsay was 6081, the mayor was Thomas Walters, Adam Hudspeth was a prominent lawyer and parishioner, there were no paved streets, no electric lights, a great deal of mud and the people of Lindsay went away for the holidays (while) the Orillia people stayed home, which might account for their better-kept (church) grounds.”

Charles arrived in Lindsay as a bachelor, but shortly fell in love with Emily Carew Wilgress of Cobourg. Married in 1887, they had six children in Lindsay. Tragically, three died in infancy.

On March 30th, 1888, Lindsay citizens read a one-paragraph note in the paper about the demolition of “Old St. Paul’s”. We might now hope that those old-timers who built it, gathered across from the old church on Kent Street, wiped away a tear or two and talked of the years gone by.

Two years later in 1890, the Parish Council passed a motion: “That the offer of the Dominion government of $4000 for the purchase of the west 66 feet of the lands owned by the Synod and Diocese of Toronto in Lindsay, and being the (former) site of the Old Church .. be accepted”.

As “Old St. Paul’s” was coming down, a block away in “New St. Paul’s”, the “Annual Report of St. Paul’s Sunday School” was published. We learned there were 22 Sunday school instructors and 298 students, twice as many female as male students and further, the girls attended twice as often (Hmm. Sounds like the basis for a study!). Impressed with the healthy program in Rev. Marsh’s first year, the Parish Council still felt a need to encourage parents to drop in more often and thank the teachers. By the end of another year, the number of teachers and students had risen by 10%, more boys were involved and the Sunday school teachers felt appreciated!

Reading these Annual Reports, one senses that an engine had been freshly tuned. Rev. Marsh’s arrival and the wise choice of wardens may have contributed to this renewal. There was certainly a new spirit: a sudden growth of committed parishioners pouring enthusiastic energy into many activities and causes. The Sunday school children sent toys to indigent native children. The Women’s Auxiliary expanded beyond prayer, reading and sewing into ambitious programs to make and send goods to those in need around the country. The church youth groups quickly expanded into new fields of “good works”. Every child was expected to help and any small thing they did was praised: “The ‘Little Girls Sewing Class with great pleasure handed in Ten Dollars to the Floating Debt of the Church.”

Rev. Marsh’s arrival at St. Paul’s paralleled the emergence of new lay leaders in the church. They worked with the old guard to produce a strong, focused vision for the future. The mortar holding it together appeared to be two-fold: a common faith and a common dream.

One of the first things they did was build a Sunday School.

“It consisted .. of an auditorium with an infants room, ladies room, and library, all of which could be opened into the auditorium for concerts. The basement was equipped as a kitchen. In 1905, the building uniting the church with the Sunday School was erected.”

In the late ‘90’s, the Boer War broke out and about 7600 Canadians went overseas. The returning wounded soldiers and grieving war widows and children all needed financial help in an era of little government support. Lindsay and Victoria County set up a branch of the National Patriotic Fund. St. Paul’s and other churches actively canvassed and people began to donate.