First Rector Came From Ireland to Lindsay With Family

Anglicans, on this 1858 afternoon, stopped and talked about him on Kent Street and by the Old Town Hall where they prayed each Sunday. They pulled each other aside, asked questions and found that others knew as little as they did.

What they were really asking was “What is this man like who will live among us as St. Paul’s first rector?” 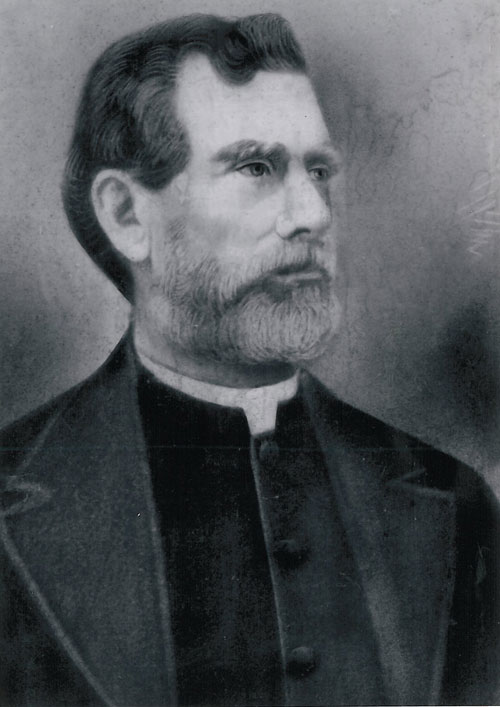 Born in Ireland in 1827 and educated at Trinity College, Dublin, the Rev. John Vicars immigrated to Canada with his wife Caroline and son and came straight to Lindsay.

A few knew more about him than others and met him when he arrived. Those at that critical meeting just three years ago were there, but others as well. James Wicks Dunsford was there. He was a local lawyer, and son of another minister, the Rev. James Hartley Dunsford of Devon, England. His daughter, Kathleen Rose, married William Boyd Irwin, distant offspring of the lumber barons, Mossom Boyd and James Irwin. He would die in 1882 before the discussions to build “New St. Paul’s” were underway. William Lloyd Russell, land agent and auctioneer, was there too. And William Jeremiah Stoughton, a 44 year old printer born in Kingston, was also there. Finally, Thomas Broughall, born in Cobourg, only 27, a recently arrived downtown merchant was there as well.

What drew them to talk about him, what they expected of him, was obvious. “Lead us in building our own church”. Events moved quickly. A year after reaching Lindsay, Rev. Vicars and these lay leaders built a beautiful white frame church on the south side of Kent St. where Mr. Grocer later stood at a cost of $2,800. The plan that had begun four years before in the Old Town Hall meeting was now complete.

About 77 years later, Joseph Lennon, in “Reminiscences of Lindsay”, wrote:

“The church was heated by two box stoves and such length of pipes that pails were put at the joints to catch the condensed soot. It was lighted by coal oil lamps in pillars five feet high.”

“The only existing photograph of the church’s interior taken in about 1877 shows it contained a number of Christmas inscriptions. Over the sanctuary was written, ‘Behold I bring you tidings of great joy’. The words which decorated the two chimneys were ‘Glory to God in the highest’ and ‘Peace on earth, good will toward men’. The hanging over the Lord’s table was a three panel embroidery with the inscription: “Unto us a child is born’ and ‘Gloria in Excelsis’ and ‘Unto us a son is given’. The lectern, which was on what is considered the pulpit side today, contained .. the words ‘The royal child is born’. The large stone font, which is in our church today, stood prominently at the front of the nave.”

Within two years, John and Caroline had a second son and then tragically, Catherine died. After two years of grieving and raising two children alone, John met and married Annabelle Mitchell of Cavan Township in 1863. Over the next six years, they had four more children.

Censuses tell interesting tales. The middle-class of the time often had one or two servants. In 1861, John and Caroline with two children had two servant girls but by 1871 John and Annabelle with six children had none. And, while raising John’s first two children, pregnant with her own first child and actively supporting her husband, Annabelle did so for awhile with one arm. An article in 1864 reflected on this. “We regret to learn that Sunday afternoon, after leaving Sunday school, Mrs. Vicars fell and broke her arm. (With) the slippery state of streets, (one must be) under the utmost caution to prevent accidents of this kind.”

What kind of minister was John Vicars? He was deeply interested in children and education. Often Chair of the Common School Board of Trustees, he hired local teachers, monitored their teaching skills and checked on their moral character. He was also a local temperance movement leader. An 1861 article remarked,

“the Rev. Vicars will deliver a temperance lecture in the Town Hall on this Friday evening” and, a week later, “Rev. Vicars lectured to a large, respectable audience (and we have) a belief (that) this is the first of monthly public meetings on the topic.”

Looking through our modern lens, we might view these temperance folk as overly righteous and straitlaced. Lindsay, though, had the same drinking problem as other raw mid-19th century towns. Saloons were everywhere. Each newspaper edition outlined the week’s “drunk and disorderly” charges and fines of $1 or $2 with court costs. Temperance movement pressure caused town council to pass a number of liquor-based motions over the decade; one startling one being by-law 184 in 1869 which raised the age when children could buy liquor and drink it in a tavern from 10 years of age to 12.

In 1871, the Rev. John Vicars left St. Paul’s in Lindsay to become Anglican rector at Canningon where he remained until his death in 1910.

It took a year to find his replacement. In 1872, the Rev. William Thomas Smithett became the new Rector. Born in south-west England in 1822, an Anglican minister by 1845, married to Sarah Rogers Gordon of England, he immigrated to British Guiana, then to Boston before moving to Galesburg, Illinois in the 1860’s. Now with five children, he immigrated a third time to Asphodel Township in Peterborough County. From there, he accepted the call to St. Paul’s.

They stayed almost ten years. During that time, several of their daughters were married in Lindsay.

It was a swiftly changing decade. Lindsay was growing quickly and its infrastructure of sewers, water and streets had to keep up or fire insurance would skyrocket. Town Council arguments erupted over water mains, fire hoses and the amount of “good, clean lake shore gravel” needed to keep the streets passable. Nearly 3000 yards of that gravel were finally spread along Kent Street’s lower blocks.

And when that topic ran out of time, they argued over the number of saloon and tavern licenses. With the rise of liquor outlets and increased prohibitionist pressures, the topic was dangerously political. Some wanted an upper limit of 18 outlets while others demanded fewer. And then they debated liquor license fees. While tavern and saloon licenses were finally raised to $80 and $100/year respectively, a tongue in cheek suggestion by one councilor: “how about 5 cents?” drew a long, sustained laugh, reflecting some councilors’ private views on the topic. While the council measured the politics of the topic, the town sheriff did his job and brought many saloon and tavern keepers before magistrates to be fined $20 for breaking the licensing laws.

Business advertisements help tell us about the changing face of Lindsay. We now shopped at Staples Groceries on Kent Street next to the Globe Hotel, bought shoes from James Connoly on Kent St., suits from John Johnson Tailor on William St and stabled our horse at Gunigal’s Livery on York St.

Farm animals occasionally travelled the outlying streets and became lost: “Strayed into the premises of William Robinson, two sheep – white. The owner can have the same back by paying charge”.

Then there was the potential lawsuit against a prospective son-in-law.

“A Manvers farmer threatens to bring suit against a young farmer who persists in sitting up with his daughter Sunday nights ‘til 4:00 a.m. The stern parent claims .. that the following day being wash day, ‘his gal ain’t of no account’ .. (and) that if they would only use two chairs, the one they do use wouldn’t cost so much in repairs”.

We also learned of the dangers of smoking:

“When a man milks a cow, he should not attempt to smoke a cigar at the same time. A young man from Lindsay tried it when out in Mariposa and got along well enough until he lowered his head and touched the cow’s flank with the lighted end of his weed. The next instant, himself and his cigar were dreadfully put out. The cow, introducing about two tons of weight into one of her hind legs, passed the force to the milker’s left jaw”.

“I was using a pair of lenses too strong. Dr. Franks (a local oculist) examined my eyes and suited them at the first attempt with a pair of his improved spectacles much weaker in power. They suit me so very perfectly that I am induced to recommending them to all needing the aid of glasses”.